Q&A: The causes and consequences of Michael Flynn’s NSC exit

I discussed the sudden resignation of U.S. National Security Adviser Michael Flynn with China Radio International this morning. The interview came hours after White House press secretary Sean Spicer said Flynn had breached his trust with Donald Trump by lying to Vice President Mike Pence about the contents of conversations with Russian Ambassador to the U.S. Sergey Kislyak. Flynn’s call to Kislyak was intercepted by U.S. intelligence sources and a transcript was reviewed by the U.S. Department of Justice.

Here is a Q&A of my conversation, lightly edited for content and clarity:

Q: We know that Flynn resigned because of the scandal involving his talk with Russian ambassador to the U.S. before Trump was in office. But what law did he exactly violate?

A: He did not violate any law simply by talking to the ambassador. If he was promising a future Trump administration action in return for a certain Russian response to the Obama sanctions against Russia that had just been announced, he might have violated the Logan Act. That law, enacted in the year 1799, makes it a crime for unauthorized American citizens to negotiate with foreign governments involved in disputes with the United States, such as promising future U.S. government action.

Q: Did Flynn have any other choices besides resignation?

A: Not really. According to the White House spokesman, Trump demanded his resignation. If that statement from Sean Spicer is true, then his only choice was to either resign or be fired. By resigning, Trump allowed Flynn to issue a statement explaining his point of view in the matter.

With this scandal, Flynn sets some sort of record for being forced to leave two consecutive White House administrations, first Obama and now Trump.

Q: White House spokesman Sean Spicer later said President Donald Trump knew weeks ago — at the end of January — there were problems with Michael Flynn’s Russia phone calls. Then what’s the long pause between Trump knowing the fact and Flynn’s resignation about? Why the wait?

A: This is the question that reporters — and many Republicans in Washington — want answered. The simple answer is that Trump knew Flynn lied, but the public did not know. We don’t know the backstory yet, but Trump may have thought he could get away with keeping Flynn on the job as long as the lies did not become public knowledge. Once the Washington Post published a report that Trump was told Flynn had lied (and did not tell Mike Pence or others in the administration), Flynn was gone in a day.

Q: Will there be an investigation of the phone call and everyone involved in the White House?

Q: What political implications does this have on the presidency?

A: It elevates the importance of criminal investigations by the FBI and Justice Department into Russian attempts to influence the election, it removes Russia’s most vocal supporter from Trump’s inner circle and empowers Russia’s top critic in the Trump inner circle, Vice President Pence. In the U.S., it’s further evidence of chaos within the White House and reinforces the concept that White House officials regularly deceive each other and lie to the public. Whether that is true or not, the perception is becoming more widely accepted.

A: He is 72 years old. He is a decorated veteran of the Vietnam War. He was a top civilian official in post-war in Iraq. He was generally respected by people in both parties. He was the first retired general to endorse Trump’s campaign for the presidency when few in U.S. politics took it seriously. He has Trump’s confidence, but some mainstream Republicans believe he is not strong enough by to stand up to Trump’s most hawkish advisers, Steve Bannon and Steve Miller. They would rather have remain as a specialist in policy rather than the top administrator.

If Vice Admiral Robert Harward, a protege of Defense Secretary Jim Mattis, is chosen, that is a sign of Mattis’ influence in the administration. If former CIA director David Petraeus is chosen, it is a good sign for the U.S. intelligence community. If Kellogg is chosen, it may be a sign that Trump values loyalty over everything else. The selection may tell us who’s up and who’s down inside the Trump White House.

Major shifts in U.S. trade policy make it vitally important to study global business and China’s role in it

Some of the top international students from the 2016 graduating class.

The global economic order is rapidly changing, and China, with the world’s second-largest economy, is becoming an increasingly important player. As U.S. international and trade policies shift dramatically under a new administration, China is aggressively seeking to bolster its leadership role in the world’s interconnected global economy on trade and other business issues.

If you are interested in pursuing a career in business journalism, now is a great time to study global business in China in the Global Business Journalism Master’s Program at Tsinghua University in Beijing. (Of course, your blog author has a personal stake in this program: I’m co-director.) The extended deadline to apply for admission to the GBJ program is March 20, 2017.

Tsinghua University is the most prestigious university in China, providing a genuine international environment to students from around the world. The Global Business Journalism Program at Tsinghua, founded in 2007, has won international acclaim for teaching global best practices in business journalism and the technical skills needed to succeed in today’s digital news environment.

The program, a partnership between Tsinghua, the International Center for Journalists and Bloomberg News, trains future journalists who can help the public understand the complexities of global business and the economy. Students in the program benefit from a faculty that includes award-winning journalists from prominent media organizations such as Bloomberg News, the National Press Club of Washington and Business Week, as well as renowned Chinese scholars with degrees from prestigious international institutions.

The two-year program is fully taught in English. Enrollment in the courses is about half international, half Chinese. The program provides internship opportunities at major media organizations and offers summer reporting programs in New York and Washington.

Scholarships are available to top applicants. The deadline to apply for scholarships, as well as admission, is February 28.

Graduates of the intensive program emerge with a network of valuable connections that can enrich their careers. You can contact GBJ or ICFJ with any questions.

To share the mini-documentary on GBJ, send your friends this link: https://www.youtube.com/watch?v=VQ6kr_rUeI8&feature=youtu.be

For more of the program, please visit the program’s official website:
http://gbj.tsjc.tsinghua.edu.cn/publish/jcgbj/index.html 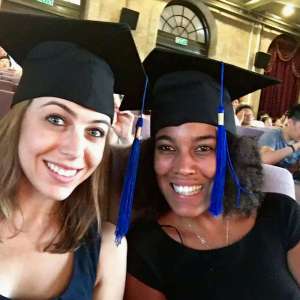