← Professor Dunham’s Ten Commandments for journalism ethics in a multimedia world
Communicating from China: My five lifelines to the world →

Tippecanoe … and Taylor, too?

As a history major, I’ve always struggled for an explanation for the surprisingly bad string of American presidents who served between 1840 and 1860.

The group also had a very high mortality rate. William Henry Harrison died one month after assuming office in March 1841. James Polk (he of Texas annexation and “Manifest Destiny”) died shortly after leaving office. And Zachary Taylor, the old (and I emphasize old) Mexican War hero died less than a year into his term, leaving Americans saddled with Fillmore, who later unsuccessfully sought to return to the presidency as the nominee of the aptly named Know Nothing Party. 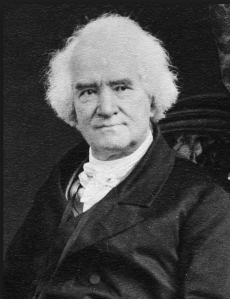 He would have become president. Philadelphia’s only vice president, George Mifflin Dallas, one of the subjects of my master’s thesis.

I will claim some academic expertise in this period of history. My master’s thesis at the University of Pennsylvania was on the 1844 Philadelphia economic elite, which included Polk’s vice president, George Mifflin Dallas. The city of Dallas, Texas, is named after this Philadelphian who might — just might — have become the nation’s 12th president if Polk had died a few months earlier, while still in office.

With apologies to Alexis de Tocqueville, the stretch of dysfunctional democracy in America had many causes, including the implacable division between North and South over fundamental social issues, the rise of anti-immigrant sentiment and the triumph of extremism (and mediocrity) on Capitol Hill.

Historians have written lots about the political debacle in ante-bellum America. But they haven’t written as much about the health debacle in the White House. That’s why the story that appeared in the April 1 edition of the New York Times (it’s no April Fool’s joke) is so important.

The piece outlined speculation about the cause of William Henry Harrison’s death. Conventional wisdom has held (for 173 years) that old Tippecanoe, the oldest man to be sworn in as president until Ronald Reagan, died of pneumonia after catching cold while delivering the longest inaugural address in American history. (I think it may have equalled all four of Franklin D. Roosevelt’s speeches combined. He had nothing to fear but pneumonia itself.)

But it turns out that pneumonia may not have caused Harrison’s death. The Times article casts a credible finger of blame at the potentially toxic supply of drinking water consumed by American presidents during the time before indoor plumbing:

In those days the nation’s capital had no sewer system. Until 1850, some sewage simply flowed onto public grounds a short distance from the White House, where it stagnated and formed a marsh; the White House water supply was just seven blocks downstream of a depository for “night soil,” hauled there each day at government expense.

That field of human excrement would have been a breeding ground for two deadly bacteria, Salmonella typhi and S. paratyphi, the causes of typhoid and paratyphoid fever — also known as enteric fever, for their devastating effect on the gastrointestinal system.

According to the Times piece, Harrison’s eventual case of pneumonia is consistent with enteric fever and may just have been one of the manifestations of acute poisoning.

“As he lay dying, Harrison had a sinking pulse and cold, blue extremities, two classic manifestations of septic shock,” Jane McHugh and Philip A. Mackowiak wrote in the Times. “Given the character and course of his fatal illness, his untimely death is best explained by enteric fever.”

Harrison was the first of three U.S. presidents to die in office (or shortly after leaving office) within a span of only nine years. I’d say that’s reason for some serious “cold case” sleuthing.

Mackowiak, a scholar-in-residence at the University of Maryland and author of “Diagnosing Giants: Solving the Medical Mysteries of Thirteen Patients Who Changed the World,” took up the challenge,  joined by San Antonio writer McHugh.

They made a strong case for tainted water as being the cause of Harrison’s death, and suggested that Polk and Taylor may have been its victims, too. They noted that the 11th and 12th presidents “developed severe gastroenteritis while living in the White House. Taylor died, while Polk recovered, only to be killed by what is thought to have been cholera a mere three months after leaving office.”

There’s further evidence to suspect that Mackowiak and McHugh are onto something. The president’s quarters on the second floor of the White House did not get running water until 1853 — Fillmore is given credit by some history books for this major technological advance. After Millard’s move, no president contracted gastroenteritis or died of natural causes. (We’ll leave the mysterious 1923 death of Warren Harding to another blog post.)

So we can’t blame the failure of Fillmore, Pierce and Buchanan on tainted water. Just tainted politics.