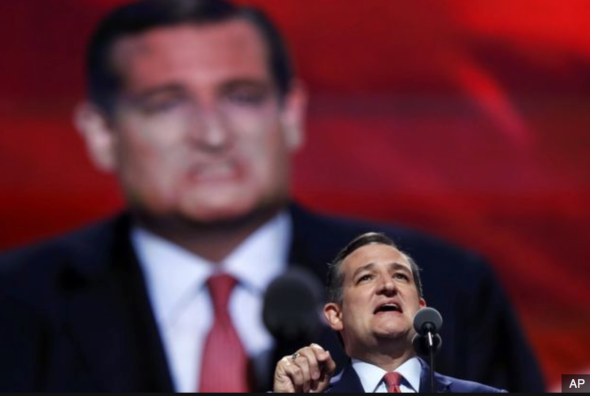 Cruz in Cleveland: The 2020 campaign begins.

The 2020 Republican presidential race began on a fractious and flummoxing night in Cleveland, one day after a deeply and bitterly divided party formally selected its 2016 nominee.

Four of the most likely contenders for the party’s nomination in four years spoke to the delegates at Donald Trump’s convention and laid out their cases for the post-Trump Republican Party, even before the current nominee is scheduled to deliver his acceptance speech on Thursday.

Pence was the loyal lieutenant to Donald Trump. The Indiana governor once supported Ted Cruz, but he switched teams after Trump’s triumph and urged other Republicans to do it. His gracious, low-key approach will endear him to die-hard Trump loyalists and to congressional Republicans who are not (and never have been) enamored with Trump.

Walker urged the party to unite, but mostly repeated his pro-business, anti-Washington talk that has made him a hero in anti-union circles but didn’t resonate particularly well with the working-class white voters who this year seized control of the Republican Party. His praise for Trump was tepid. “A vote for anyone other than Donald Trump is a vote for Hillary,” he told the delegates.

Rubio, as has been his style during his single term in the Senate, tried to have it both ways. He didn’t attend the convention — giving him a bit of distance from Trump, in case the GOP nominee eventually self-immolates. But his brief video remarks included all the right touches to win applause from the Trump loyalists in Cleveland. “The time for fighting each other is over,” said Rubio, who famously described Trump as a small-handed “con artist” and “the most vulgar person ever to aspire to the presidency.” That was then, this is now: “It’s time to come together,” he told delegates.

That message didn’t reach Ted Cruz. The Texas senator, dubbed “Lyin’ Ted” by Trump, couldn’t bring himself to endorse the nominee. Cruz, whose father was linked to Kennedy assassin Lee Harvey Oswald by Trump, gave a Reagan-like conservative call to arms. He talked conservative principles. He didn’t talk Trump. He didn’t endorse Trump’s policies or his candidacy. He said to Americans, “Vote your conscience.” He was heckled during his speech. He was booed as he left the stage.

It was a calculated gamble with his national political future hanging in the balance. If Trump manages to win the election, Cruz is going to be a non-person in Donald Trump’s Washington. The Senate leadership, Republican and Democrat, despises him and the president would, too. If Trump loses, Cruz has already volunteered to lead the ragged Republican survivors.

In the meantime, he’s a non-person in Trump World. Even Las Vegas casino magnate Sheldon Adelson disinvited Cruz to his convention suite, with associates telling CNN that he didn’t want to be an anti-Trump prop at this point.

The reaction from Republicans was varied, but it was almost all emotionally charged, positively and negatively.

Of note, Ted Cruz is getting praised from both the left and right of the GOP, but not from the establishment. Perfect set up for 2020.

“To me, Ted Cruz showed America what he really is,” King told NBC in a post-speech rant. “He’s a fraud. He’s a liar. He’s self-centered. He disqualified himself from ever being considered for president of the United States.

“He took a pledge to support the nominee. Today the Ted Cruz that I’ve known — he cannot be trusted and he’s not a true Republican. He’s not a true conservative. I never saw as much outrage on the floor as I did tonight.”

King’s views are widely held among moderate Republicans and Trumpistas, but Cruz is confident there is a path to victory following a Trump defeat. Like Ronald Reagan following his 1976 loss to Gerald Ford, Cruz sent a clear signal that he will keep on running, even if it means challenging an incumbent President Trump in four years.

But not every Republican shares King’s contempt for Cruz. The Texas firebrand is hoping that people like David Frum will help him rebuild the Republican Party from the rubble of Trump — if it is indeed rubble come November.

Ted Cruz earned the most honorable boos at a GOP convention since those for Nelson Rockefeller for condemning the John Birch Society.

I have never been more proud to work for Ted Cruz that I was tonight. This speech will survive the test of time-historically courageous.

//platform.twitter.com/widgets.js
For one day, at least, Ted Cruz got what he wants. We’re talking about him and not about Donald Trump. And we’re talking about him as the post-Trump voice of the GOP. That’s what most reporters are writing today. But remember the other three 2020 candidates who also auditioned for the next nomination on a crazy night in Cleveland.

Day 1 Analysis: What else could go wrong for Trump? (We have 3 days to find out) 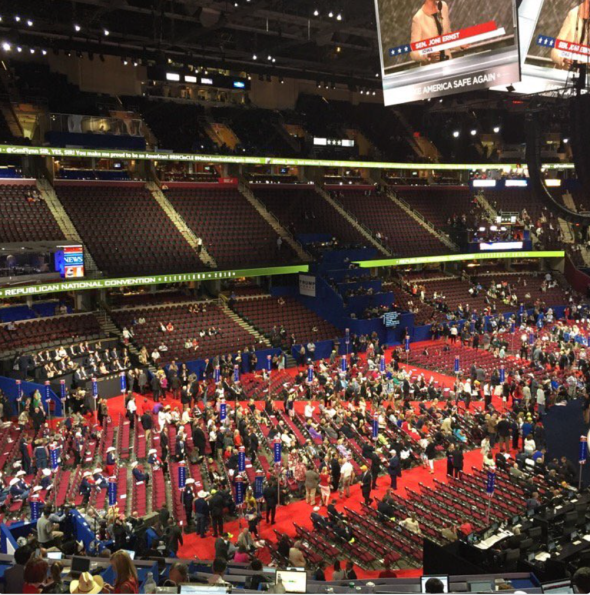 A national presidential nominating convention is supposed to help the party’s candidate win the general election.

Since I started watching political conventions in 1968 (and attending at least one each campaign since 1976), there have been only two exceptions: the 1968 Democratic disaster in Chicago, and the 1972 Democratic chaos-fest in Miami.

After one day, I’m prepared to say that the 2016 Republican National Convention in Cleveland could join this short and ignominious list.

And that was before the plagiarism thing.

From the early morning, the Trump campaign seemed to be trying its best to sabotage its stated Day One message of national security. At a breakfast meeting with reporters, its campaign chief picked an unnecessary fight with Ohio Gov. John Kasich by insulting the popular governor of a state he needs to win to have any plausible shot at an Electoral College majority. Paul Manafort’s unforced error drew a fast and furious rebuke from the Ohio Republican Party chair. Suffice it to say that Ohio Republicans will concentrate their efforts and passions on re-electing endangered incumbent Sen. Rob Portman now, rather than the presidential race.

It was “Make America Safe Again” night. Do you think it was effective?

Later in the morning, in an episode I missed until it was pointed out on Twitter by ex-Bush speechwriter David Frum, Team Trump forced the GOP to tear up its platform to excise a section that might ruffle the feathers of one Vladimir Putin. Kowtowing to the Russian leader is not exactly the image of strong American leadership. Hard-core Trumpistas won’t care, but undecided voters won’t be impressed.

To further alienate Jewish voters, the Republican National Committee had to shut down a convention live chat during a speech by former Hawaii Governor Linda Lingle (who happens to be Jewish) when it was bombarded by pro-Trump, pro-Hitler, profanely anti-Jewish ranters, according to a report in the Times of Israel.

And then there was a white supremacist riff from Iowa Congressman Steve King, who belittled all contributions to global civilization from non-white, non-Christian humans. “Where did any other subgroup of people contribute more to civilization?” he asked on MSNBC, setting off a hourlong tweet storm in the Twitterverse.

Before the prime-time speeches, Republicans had a Democrat-like rumble over convention rules. It reminded me a little of Chicago 1968, when Mayor Daley had the microphones turned off on anti-war, anti-Humphrey delegations. Republican National Committee Chairman Reince Preibus’ team played hardball to prevent an actual recorded  vote that would have shown the world the level of dissatisfaction with Trump among convention delegates.

You have to divide the evening session into three parts: pre-Melania, Melania and after Melania.

Pre-Melania was red-meat rhetoric for Trump Lovers and Hillary Haters. Also birthers. One speaker said Obama was certainly a Muslim. Several called for throwing Clinton in jail.   Rudy Giuliani is passionate, and he hates Hillary Clinton, but there’s nothing he said that would convince wavering voters why they should vote for Trump. Indeed, I didn’t hear a single Trump policy initiative from any speaker.

Post-Melania was a sleeping pill for America. Rising star Senator Joni Ernst of Iowa was pushed out of prime time by a rambling, never-ending speech by an obscure military guy named Flynn. Don’t think this will launch a speaking career for him. And Ernst, speaking to a mostly empty auditorium, gave her normal stump speech, evoking the parallel political worlds Republicans live in. Just watching the early lines to the exits, you can see that this is not a Republican national convention, it is the Trump national convention. Many Trump delegates don’t care about Republican rising stars. Only Trump.

Finally, Melania, the most important speaker of the night. I liked the speech. It was well-written. It was human. It was plagiarized.

The part about honesty.

To all the Trump backers who tweeted that Melania will bring class back to the White House after eight years of Michelle Obama, all I can say is … I don’t really have anything to say.

I had forgotten that Mrs. Obama said many of the same words in a similar introduction-to-the-nation speech eight years ago. In the afternoon, Mrs. Trump boasted in an interview that she had written almost all of her speech. By the end of the evening, Team Trump released a curious statement citing a “team” of speechwriters.

As the aforementioned Hubert H. Humphrey once remarked, “To err is human. To blame someone else is politics.”

Day Two. What else could go wrong?

I will be analyzing the convention on CCTV’s World Insight program at 10:15 a.m. EDT/9:15 EDT on Tuesday. Tune in for a live discussion.