The ten best political campaigns of 2014

It’s been a good year for very bad campaigns. But there also have been some very, very good efforts put forth by candidates across the United States, including a few who have surprised the political establishment and the Pundit Elite.

Here are my picks for the ten best campaigns of 2014 — whether they win on Election Night or not.

Well, that was the predicament faced by Brian Schatz, Hawaii’s former lieutenant governor and now the second-youngest senator at age 42. He worked smart, worked hard, and won — barely — in the primary against Rep. Colleen Hanabusa.

“I was not overconfident that we were going to be successful,” he said after escaping the primary by seven-tenths of one percentage point. Now he’s coasting to a general election win against Republican Cam Cavasso.

The Bay State may have voted Democratic in every presidential race except one in modern times, but it has an independent streak when it comes to picking its governors. Republican Mitt Romney was chosen by Massachusetts voters back when he was a moderate. And this time a Republican healthcare executive with business bona fides and an independent streak from his party on abortion and same-sex marriage is poised to win a surprising victory.

Charlie Baker, who was defeated by outgoing Gov. Deval Patrick four years ago, has run a campaign so steady that he won the endorsement of the iconically liberal Boston Globe. Indeed, the Globe praised his track record of “steady management and proven results.” He’s also been helped by the mistakes of Democratic nominee Martha Coakley, who is poised for another come-from-ahead defeat.

It’s not comfortable being a Republican congressman representing a New York district carried twice by President Obama. But two-term Republican Chris Gibson has done it through hard work, skillful constituent service and strategic moderation on issues such as arts funding and gay rights. (The retired Army officer is a Republican co-sponsor of the Employment Non-Discrimination Act designed to protect GLBT Americans from workplace discrimination.) One recent poll shows him 20 percentage points ahead of his Democratic rival in a district that Democratic Gov. Andrew Cuomo will win handily.

The Texas Attorney General has run the most disciplined governor’s campaign the Lone Star State has seen since George W. Bush toppled Ann Richards in 1994. Abbott has not veered off script, and that script is designed to maximize support among swing voters and motivate hard-core Republicans. With the national press corps hoping against hope for a dramatic storyline this year — Texas is “turning blue” or famous filibusterer Wendy Davis pulls off a miracle in the Land of Bush and Perry — Abbott has taken all of the drama out of Democratic dreams.

The Colorado Senate seat held by freshman Democrat Mark Udall wasn’t on many lists of vulnerable seats at the beginning of 2014. But Republican congressman Cory Gardner has been a nightmare for Democrats from Denver to Washington. He’s run an anti-Washington campaign designed to appeal to the swing state’s large bloc of disquieted independents, as well as populists peeved at the sophisticated population of the state capital. Gardner’s campaign site boasts that he is running “to represent all of Colorado, not just those from a particular city or political party.” Take that, Denver.

Democrats have tried to paint Gardner as an extremist and a harsh partisan. But it hasn’t seemed to stick to a candidate known for his high energy and hailed by DC media outlets as a Republican rising star.

From all the Republican TV commercials, you’d think that “Barack Obama” is the name of the Democratic nominee for Senate in North Carolina. But rather than accept southern-fried doom in an anti-Obama year, the first-term Democratic senator has turned the tables on Republican nominee Thom Tillis, and has put him on the defensive about his role as state House Speaker in the extremely unpopular ongoings in the state capital of Raleigh. Contrast Hagan’s competitiveness in final pre-election polls with the flailing efforts of the two other Democratic Senate incumbents in the South, Mark Pryor of Arkansas and Mary Landrieu of Louisiana.

The last Republican to win a Senate seat in West Virginia was six decades ago. That’s going to change this year as longtime Rep. Shelley Moore Capito sweeps to victory to succeed Democratic legend Jay Rockefeller.

While West Virginia has swung Republican at the presidential level in the past four election cycles, it has favored Democrats for most statewide offices. The 60-year-old Capito, an influential House member, is considered by many to be a pragmatist, conservative on social policies, strong on guns but not hostile to organized labor. Her campaign has been pitch perfect. No wonder Kyle Kondike, the managing editor of the University of Virginia’s Sabato’s Crystal Ball, calls her the “best Republican Senate candidate this cycle.”

Win or lose — and he will probably lose — Republican Ed Gillespie has run an exceptionally good Senate campaign in Virginia against a popular Democratic incumbent, Mark Warner. Gillespie has worked harder than just about any candidate in the country, has highlighted a future-oriented set of issues, and has built a statewide organization out of the ashes of Republican defeats in recent years. His efforts have paid off as he has trimmed Warner’s lead significantly over the past two months.

Sen. Warner, you may recall, also was defeated in his first Senate campaign by a venerable incumbent, Republican John Warner, before going on to win the governorship. Gillespie’s excellent campaign should move him to the front of the line of GOP candidates for governor in 2017.

This is a year of promise for the children of former Florida governors, In Texas, Republican Jeb Bush’s son George is about to become the Lone Star State’s land commissioner. And in the Sunshine State, Democrat Bob Graham’s daughter Gwen is in a tight race with incumbent Republican Rep. Steve Southerland.

Graham has learned the basics of political campaigning from her masterful dad. She has raised more money than the Republican — something very few Democratic challengers have done this year. She has out-organized the incumbent and has mobilized early voting that favors Democrats by 14 percentage points. She has called in dad’s chits and got a campaign visit from former President Bill Clinton. Victory is far from assured, but a strong campaign has given Graham a decent chance in a tough Democratic year.

Yes, he may lose his job as Majority Leader if Republicans can pick up at least six seats. But he might be seeing the specter of 2016 defeat in Nevada in the person of Republican Gov. Brian Sandoval. The incumbent governor is running 25 percentage points ahead of his 2014 Democratic opponent. He may just keep on running.

Sandoval, the first Latino to serve as a federal judge in Nevada, would be a good bet to roll the dice against Reid. It would be hard for the Democratic senator to convince voters that Sandoval, who has presided over education reform and a slowly improving economy, is a fringe extremist like 2010 GOP nominee Sharron Angle.

My final White House pool report: Inside the Cabinet Room as President Obama meets with congressional leaders on Syria

On my final day at the Houston Chronicle, I was fortunate enough to have White House pool duty, where I witnessed up close the debate over possible military action against Syria. Here is the pool report I filed to fellow reporters:

With the Obama administration ramping up its efforts to persuade Congress (and the American people) to back a resolution supporting a U.S. military response in Syria, President Obama met with a bipartisan group of 16 lawmakers in the Cabinet Room.

A tight pool got a glimpse inside at the top of the meeting. (Check TV video for more precise quotes and more atmospherics.)

Vice President Joe Biden sat directly across the table from the President. The VP brushed his fingers across his temples and held his hands clased in front of his mouth as the President spoke.

Secretary of State John Kerry, seated at one end of the table next to Rep. Engel, sat with his hands clasped in front of his chin. 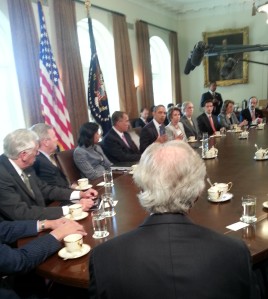 The congressional leaders sat without expression throughout the President’s six minutes of public remarks.

President Obama began speaking at 9:52 a.m. EDT, summarizing his case that Syria “should be held to account” for what he said was clear evidence of chemical weapons use.

“I made a clear decision that America should take action, ” he said.

He then addressed the congressional leaders,  calling for hearings and a “prompt vote” on a Syria resolution.

“The key point that I want to emphasize to the American people,” President Obama said in the take-away quote (check transcript for accuracy): “It is proportional,  it is limited, it does not involve boots on the ground.  This is not Iraq. Thos is not Afghanistan. This is a clear proportional response…”

The President responded to one question,  saying the U.S. “will be more effective” if Congress approves a resolution. President Obama said “I’m confident” Congress will act.

The pool was ushered out at 9:58 as the President twice said, “Thank you, guys.”

He then started the meeting by saying “good to see you, Buck” to Rep. Buck McKeon.

Some of the lawmakers may speak at the stakeout after the meeting. Open press.

The lawmakers — and the camera people — had left the White House stakeout point when I decided to give farewell remarks. (Photo by Sarah Ferris)

On a personal note,  today is my final day with the Houston Chronicle. I am heading to Beijing tomorrow to teach multimedia journalism and run the Global Business Journalism program at Tsinghua University’s graduate school of journalism. It has been an honor and privilege to cover the White House for most of the past 29 years.

I’d like to salute the hard-working White House correspondents who strive for transparency, access and information. And I’d like to wish Godspeed to President Obama, my (very) distant cousin on the Dunham side. My grandfather Barrows Dunham and President Obama were both known as Barry to their schoolmates,  but the comparisons end there.

Good luck to all!