Explaining America to the world: I analyze Trump’s populist revolt for a Finnish audience

When I moved to Beijing in 2013 to explain global best practices in journalism to a diverse group of Global Business Journalism Program students, I had not expected that I also would frequently be asked to explain American politics and democracy to a global audience. I’ve been interviewed regularly in Chinese media, but also in European news outlets from Finland to Slovakia (plus the good old USA).

This week, I discussed the rise of Donald Trump with my friend Matti Posio, who heads up the national news operation for a group of Finnish newspapers, Lannen Media. Here’s a transcript of our conversation:

Q: You have met Donald Trump in person. Tell me about it.

I am one of thousands of people who has met Donald Trump at black-tie social events. For me, it was the White House Correspondents’ Association Dinner in Washington several years ago. He was cordial and polite, very different than his public persona. He was clearly a celebrity among celebrities. Reporters were coming up to him an asking if they could pose for photos with him. He was patient, unlike the hot-tempered character on the campaign trail. Nobody I talked to thought he would ever run for president. I really didn’t do more than exchange small talk. He seems comfortable with social conversation and, obviously, he has been going to formal events for a half-century. From my very short glimpse into his life, I would say that he is a very good actor playing certain roles that are expected of him at different times.

Q: I don’t see how anyone can actually be like that. Is his personality the same in real life than portrayed on media? 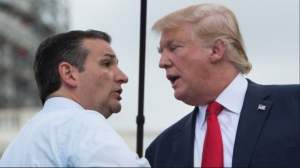 Q: What is it that foreigners / Europeans really don’t get about Trump?

Do you mean, “Why is he getting so many votes? Why would anyone vote for him for president?” Politically, he is the right man at a very strange time in American political history. After two decades of anti-elitist rhetoric on right-wing talk radio and the Rupert Murdoch-owned conservative cable news network Fox, there is a large minority of the country that believes their way of life has been taken from away from them by the faceless “them” — minorities, immigrants, big companies shipping jobs overseas, corrupt speculators, too-big-to-fail banks, gays and lesbians, working women, feminists, or Big Government giving their tax dollars to undeserving others, Donald Trump is a reality TV performer and is playing to that audience. He is playing the role of populist demagogue, race-baiter, keeper of the working-class flame, proud leader of the “poorly educated,” ranter against the system and the elites and Wall Street and Big Business. So what if he is a son of privilege, a highly educated billionaire and someone who has played the system for years to make deals and make money.

Q: What are the main reasons he has become so popular?

He strikes a responsive chord with less-educated, lower-income white voters across the political spectrum. He is winning among moderate Republicans, conservative Republicans and Evangelical Christians.. He is even getting a modest share of higher-educated, higher-income voters. He is bringing new voters into the system, economically struggling people who thought they had no voice until Donald Trump appeared. While Trump moved relentlessly forward in a media frenzy, his opponents spent months destroying each other rather than going after him. His opponents sound like traditional politicians — which they are — at a time American voters yearn for the myth of “authenticity.” Trump is acting the role of “truth-sayer” supremely well, even if the fact-checking web sites say he is lying much of the time.

Q: He is behind both Hillary Clinton and Bernie Sanders for the real election. Could he still win?

When it is a one-on-one race, anything could happen. If there are independent candidates dividing the non-Trump vote, anything could happen. There has never been an election like this. Bill Clinton says he expects a close general election. Pundits, who have been wrong all year, are predicting a Trump defeat that costs Republicans control of the U.S. Senate. I’ve been predicting that the public will eventually tire of Trump and “cancel” his election-year reality TV show. But I’ve been wrong for months, along with my fellow political reporters and pundits. So, to repeat an American political cliche, never say never.

Q What would happen if he really became the president? How much would he change?

In recent days, his primary opponent rival Ted Cruz has claimed that Trump told the New York Times editorial board privately that he would act very differently as president than he has during the campaign, as least as far as immigration is concerned. None of us know. As a reporter, I’ve always said that the best way to judge what a politician will do after getting elected to office is to study what he or she promises during the campaign. We can’t read his mind. If he does everything he’s promising to do on the campaign trail, there will be a constitutional crisis and a global economic and diplomatic catastrophe. You’ll have the Putin-Trump axis versus the world. I can’t see it. He would have to change or he would be ineffective domestically and isolated internationally.

Q: Let’s assume he doesn’t become the president. Has he already achieved something, left a lasting mark in the country and its politics? What is it?

Yes, he has achieved something of historical significance. He has destroyed Ronald Reagan’s Republican Party. If he wins the nomination, the party of Reagan will have ceased to exist. It is the same thing that happened to the Democrats in 1972, when George McGovern won the presidential nomination and destroyed the four-decade-old New Deal coalition of Franklin D. Roosevelt. Although Democrats won the White House four years later because of Nixon’s Watergate scandal, it took them two decades to recover institutionally from the crack-up of 1972.

Q: You are currently a professor in China. What is told about Trump there? How much of it is true?

Trump has been portrayed in Chinese media as an eccentric, bombastic showman and celebrity. He’s seen more as a curiosity than a threat, so far, at least. Most people who are savvy about the United States ask me, “Could Trump be elected? Why would Americans vote for Trump?” It’s similar to questions people would ask you in Europe. The coverage of him on Chinese state television is generally straightforward, so far, at least. There has been a bit of negative editorial commentary in traditional state print media, but nothing nearly as inflammatory as what Trump has said about China. And Japan. And Korea. And Mexico. And Iran. And Europe. And Obama.

Q: Would you consider moving to China all together, should Trump be elected?

Taping an interview at YLE, the Finnish radio network

Movie night at Tsinghua: All the President’s Men

An exact replica of the Washington Post newsroom was built in Hollywood.

I held my first “movie night” for my Chinese journalism grad students on Sunday night. After considering a few journalism-related classics (you can probably guess which they are), I chose one that highlights the best of journalism: “All the President’s Men.” It’s not just a journalism movie, of course. It’s a great detective story and an all-around outstanding movie with crisp writing, superb acting and tension-inducing directing. “All the President’s Men” is important journalism history. It’s also important American history. But I discovered as I played the video that many of the uniquely American topics (and 1970s cultural norms) contained in the movie were difficult to understand for my Tsinghua University students. So, in addition to playing the movie with English subtitles (do you realize how quickly Dustin Hoffman speaks, with that nasal accent of his?), I occasionally paused the movie for verbal annotations. Here are some of the important points I needed to explain to the students:

What is that machine those actors are using? And who is Robert Redford?

Any suggestions for my next American journalism movie night?