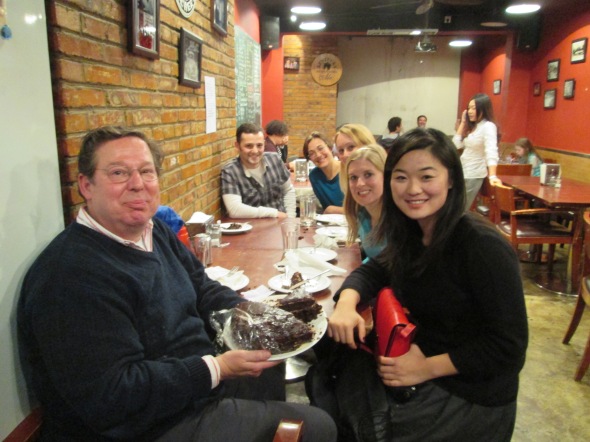 It’s been nearly three months since I arrived in Beijing, and I’ve finally had my first attack of homesickness.

It started two weeks ago with a trip to a local Western market to pick up the fixings for macaroni and cheese (the real thing, not the Kraft version). It was followed by my birthday dinner of Texas BBQ and chocolate cake with peanut butter frosting. Then I broke down completely yesterday and went to Jenny Loo’s supermarket with my friend Eunice. My haul — a rare taste of Americana — included fresh bagels (“Montreal style”), feta cheese, olives, canned diced tomatoes for pasta sauce, fresh tortillas, tortillas chips, salsa, peanut butter and a Woody Allen movie.

A pretty pricey splurge, all told, except for the Woody Allen movie (“Midnight in Paris”), which cost 13 yuan, or $2.16.

I’m whipping up my famous linguini tonight with some of my big food purchase. But before I do, here’s a quick list of ten things I really miss after 11 weeks in China — and some that I decidedly do not.

1. My wife and family

5. My good friends back home

8. Gossiping with my Texas political sources

What I Don’t Miss:

3. The newspaper world I left behind

7. Texas BBQ (I’ve been surprised by the fine barbecue here.)

8. The Washington football team with the racist name

10. U.S. media coverage of the 50th anniversary of the Kennedy assassination

An American in Tiananmen on China’s National Day

On Oct. 1, 1949, Mao Zedong read a statement before a bank of microphones and hundreds of thousands of people assembled in Tiananmen Square declaring the formation of the People’s Republic of China.

Sixty-four years later, I was one of the perhaps dozens of “westerners” visiting Beijing’s most famous landmark on China’s National Day holiday. It is a festive celebration, with special decorations, tourist-friendly hats, face painting, parades and family pilgrimmages.

The Lion and Mao. (Photo by Rick Dunham)

The scene, I thought, was very much like the Fourth of July celebrations on the National Mall in Washington. Patriotism, pageantry, family, country.

My small group of three Americans (thanks, Caroline and Sara) tried to blend in with the hundreds of thousands — more probably, millions — of Chinese tourists. Well, we were never going to blend in. Caroline and Sara are striking young blondes, and perhaps a dozen Chinese families asked to have their photos taken with them. (Nobody asked me.)

We walked around Tiananmen, headed inside the main gate toward the Forbidden City, and then wandered through the historic core of old Beijing.

I hope this photo essay gives you a sense of the grandeur and the scope of the day.