What traits are peculiarly American? A U.S. expat reflects. Only in America: Even Santa totes a rifle.

It’s time for Christmas holidays with the family in America. After working and living in China for six and a half years, I now experience culture shock each time I return to Washington.

I also appreciate those American characteristics that are so deeply ingrained that I can’t change, no matter how hard I try to adapt to my surroundings in Beijing.  Here is a list of some of those American traits that give me reverse culture shock – and some I can’t shake.

Greetings from China: 5 pleasant discoveries and 5 things that might take some getting used to 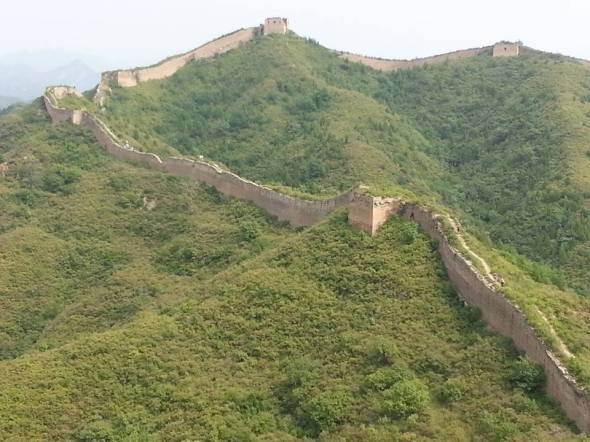 This is where I went hiking … for the history, the exercise, the fellowship and the fresh air.

The eagle has landed. I’ve been in Beijing for four days now — long enough to hike a remote section of the Great Wall, sample the best Peking Duck (Beijing Duck? Just plain roast duck?) of my life and explore every nook and cranny of one of the most beautiful college campuses in the world — but not quite long enough to get over jet lag.

Rather than write the traditional “first impressions” story, I’m going to share five of my pleasant discoveries in Beijing and an equal number of things that will take some time to get used to.

The campus is stunningly beautiful, an island of serenity in a bustling metropolis.

1. Tsinghua University is one of the most beautiful in the world. It’s made one of those top ten lists for beautiful campuses, and I can see why. From the magnificent gates to the marvelous and varied sculpture, from the breath-taking canals and lily ponds to the impressive architecture and ivy-covered walls, this is a fine environment for teaching and for learning.

2. The high quality of the faculty. They don’t call it the MIT of China for nothing. The professors here are among the best in the world. The journalism faculty is uniformly excellent. I hope to live up to their very high standards.

3. The high quality of the students. I could tell from the moment I began my new student orientation session last Friday morning. These students are the best and the brightest, not just from China but from around the world. They are smart and they are motivated.

4. I can get around town without too much problem. It is a problem that I don’t speak Chinese. (Yet.) But the Beijing subway — most of which was built for the 2008 Olympics — is modern, efficient, inexpensive and very easy to navigate. Crowded? That’s a given. There are more than 20 million people here in the capital.

5. I can communicate with the outside world. Yes, I heard all of the warnings about the Great Firewall of China. And all the blocked sites. The good news, at least at this point, is that I have been able to communicate with all of my old and new friends with only minor problems. 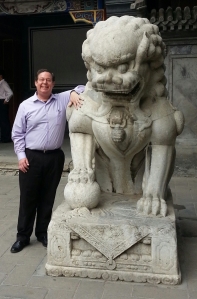 They say everything is bigger in Texas. It’s even bigger in Beijing. Here I am with one of the campus’ lions.

1. A fifth-floor walk-up apartment. On the bright side, I’m getting a lot of aerobic exercise every day.

2. Cold showers for four days. Well, I finally have hot water. Actually, I’ve had it all along but haven’t known how to turn it on. You see, the instruction guide to my apartment is in Chinese and I’m linguistically challenged. It means I also couldn’t figure out how to use the satellite TV. Or the apartment internet. The take-away lesson: Keep taking those Mandarin lessons on the Mango app.

3. Can you believe the way people drive around here? Washington drivers are awful. Drivers in Rome are maniacs. Drivers in Naples view traffic signals as suggestions. Drivers in Beijing are all of that and more. U-turns in the middle of traffic. Left turns from the right lane. Turning right on red without stopping or even looking for pedestrians or bike riders.

And while you’re at it, watch out for the bikes coming at you every which way. And the pedestrians darting across highways and major thoroughfares in the middle of traffic.

4. The parking situation. People park any place they can find a space. Not a parking space. Any old space. They park on sidewalks. They park on pedestrian malls. They park where they want, when they want. Just get out of the way when the car is coming at you.

5. Peanut butter is hard to find. I love Chinese food. I could eat it almost every meal. But I am going through peanut butter withdrawal now. Yes, yes, I’ve been told that you can get peanut butter at Walmart and in European grocery stores in Beijing. But I haven’t gone on a scouting mission yet.