Hillary Clinton has the nomination, but Bernie Sanders had the passion on the first day of the Democratic National Convention.

Americans claim to want their politicians to be “authentic.” Even if the authenticity comes by way of Hollywood (like Ronald Reagan’s aw-shucks, cowboy hero persona) or Madison Avenue (Bill Clinton’s rural roots in “a place called Hope”).

That’s one of the things I’ve heard over and over from Donald Trump supporters. Some concede he’s a bigot, others admit he’s a bully and a blowhard, many acknowledge he’s a narcissist of the first order. But they like how he’s willing to “stick it” to “them.” The “them” is elites (however you choose to define them), minorities, foreigners, Muslims, the “politically correct,” even his fellow Republicans.

Hillary Clinton has a problem with this concept of being “real.” Many voters remain uncertain of who she is at her core, what she believes in, who she trusts, or if she can be trusted. Only 30 percent of Americans consider her honest and trustworthy, according to a pre-convention CNN poll. It’s imperative for Clinton to use her week in the national media spotlight to shift public perceptions of her, if she is to win what is now a close race with Trump. 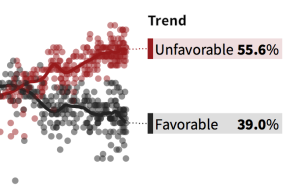 Hillary Clinton’s image has been damaged during the 2016 campaign, as seen in HuffPost Pollster graphic.

On the first day of the convention, Team Clinton may have tried too hard. Message: she cares. Message: She’s passionate about people’s problems. Most of the speeches were too smooth and too predictable. (Exceptions: Michelle Obama and Bernie Sanders. More on that later.)

“Every speech here feels vetted to death,” Adam Nagourney, Los Angeles bureau chief of the New York Times, wrote during a convention liveblog. “I’m sure they have an extensive speech reviewing-shop.”

The action on the convention podium was disciplined and carefully scripted, even if the crowd was raucous and often off-script. Somehow, the DNC managed to squeeze the intelligent ridicule out of Al Franken. Instead of coming off as clever, he came off as somebody reading a speech written by someone else, which it undoubtedly was.

The most unscripted moment of the event came when Franken and comedian Sarah Silverman were directed to waste time so that ’60s music legend Paul Simon could get comfortable at his piano. She filled the “dead time” with a pointed message to the “Bernie or Bust” crowd: “You’re being ridiculous.”

Franken, who became famous as a political commentator by roasting Rush Limbaugh as “a big, fat idiot,” looked momentarily stunned. Then the convention returned to script.

The most effective scripted moments came during First Lady Michelle Obama’s speech. In a speech praised by political analysts from both parties, she described her life in the White House and its impact on her family. In a gentle reminder that Donald Trump is the Republican nominee, she noted that the 2016 election will determine “who will have the power to shape our children for the next four or eight years of their lives.” She also noted politely that you can’t solve complex policy problems in 140 characters.

“Michelle Obama tonight delivered one of the best speeches I have ever seen in my career in politics,” former George W. Bush adviser Mark McKinnon wrote on his Facebook page.

Obama was followed by a keynote address by Massachusetts Sen. Elizabeth Warren, who was predictable in her attacks on Trump and her “proud” support of Hillary.

(The password of the night was “proud.” Democrats are proud of Hillary.)

Warren’s address, which did not receive nearly the applause of Obama’s, served as a bridge to Bernie Sanders’ gracious speech endorsing Clinton. The Vermont senator spent 30 minutes making the case both for Clinton and against Trump, all the while thanking his supporters in the Democrats’ socialist, populist revolution. It was no concession speech. He conceded no ground. But he did advance the cause of party unity.

One Sanders speech is unlikely to mollify his hard-core supporters. Acrimony  was evident everywhere on Monday. In state delegation meetings. On the steamy streets of Philadelphia. And in a convention hall that was packed (unlike Cleveland), but abnormally unresponsive to speakers’ calls for unity — at least until Obama and Sanders came along late in prime time.

“It was a rough day earlier on,” Senate Democratic Leader-in-Waiting Chuck Schumer admitted on NBC. But it could have been worse, he quickly added: “Compare this to Ted Cruz”

If this was your first time watching a national convention, you might think these public displays of division are bad news for Democrats’ hopes of winning. But for those of us who’ve seen Democratic schisms in the past, this was relatively mild. Past divisions have been deeper and far more fundamental. Take it from this Republican activist:

Let’s be honest. This is a hot mess, but they’re Democrats. They care about winning. They’re like that. By then end it’ll be a lovefest.