The rise of Trump explained in four graphics 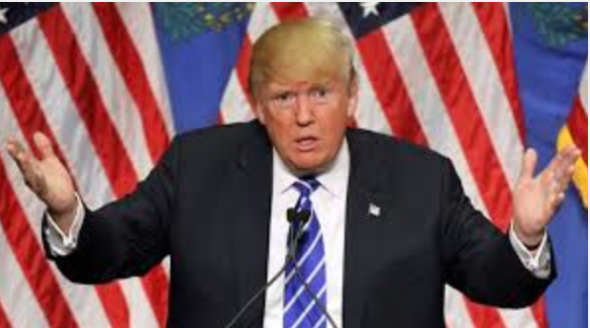 How did he get this far this quickly?

A little more than a year ago, when Donald Trump opened his presidential campaign by gliding down the golden escalators of Trump Tower, with paid extras hired from the New York theater community to pad the crowd size, it was easy to dismiss the real estate mogul as a self-promoting dilettante more interested in publicity than politics.

So many people got it so wrong. His Republican rivals, in the famous words of George W. Bush, “misunderestimated” him. The Pundit Elite kept predicting that just one more embarrassing gaffe would extinguish his White House hopes. The nation’s best newspapers kept churning out damning investigative pieces questioning Trump’s business acumen, his honesty, his ethics, his wild flip-flops on issues and his command of basic knowledge of the world ~ and it seemed to matter nary a bit.

Historians will be discussing the Trump phenomenon for decades. Yet here we are, the general election upon us. How did Donald Trump, a political neophyte and nearly lifelong Democrat, emerge as the self-proclaimed champion of conservative values, the master of the Republican National Committee, and the voice of angry white people?

It’s easy to oversimplify Trump’s appeal, but I’d like to try to explain the rise of Trump in four informational graphics. 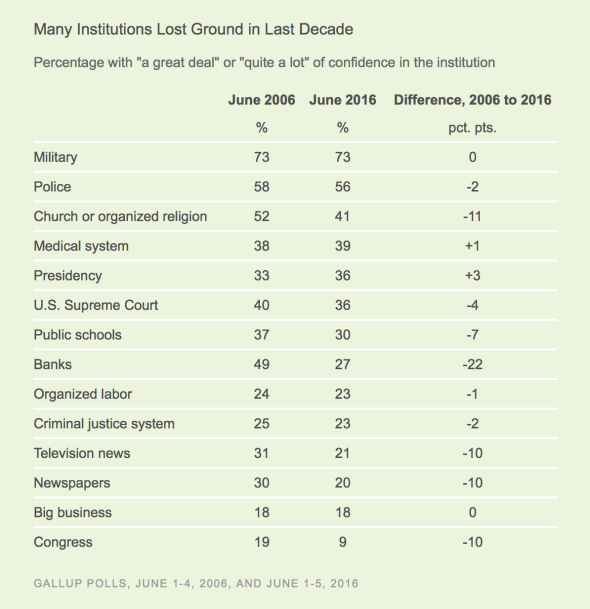 Until the 1960s — amid Vietnam, civil rights struggles and social unrest — Americans had almost universally positive views about basic institutions in U.S. society. The trend has been downward ever since. But there has been a significant drop in the past decade in institutions as diverse as religion, schools, banking, the news business, the courts, and, of course, the Congress. There are two major reasons: self-inflicted wounds, such as congressional dysfunction and the Catholic church sexual abuse scandal, and a partisan media led by Fox News, which has made it a constant theme of its programming to tear down institutions in order to rebuild America in its ideological image. Donald Trump positioned himself as the champion of the “little guy” against all the big, bad institutions — from Wall Street, to the news media, to big business, to the “rigged” Congress and court system … even against the Pentagon generals who know less about military strategy than the reality-TV star.

#2: There has been a rapid, dramatic shift to the left on social issues 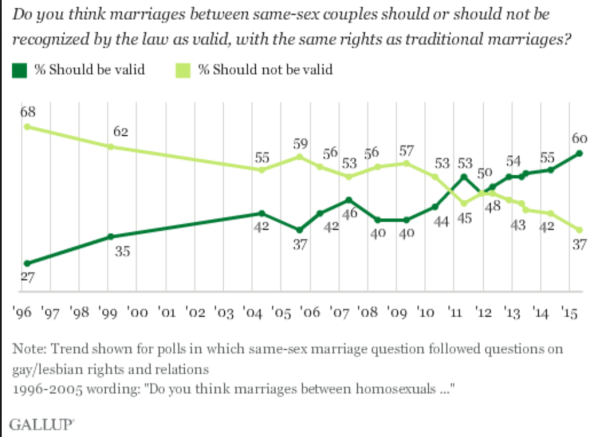 Within the past decade, the United States reached a tipping point on social issues. On gay rights, the nation went from strong opposition to same-sex marriage to overwhelming support for the new reality that was blessed in 2013 and 2014 by the U.S. Supreme Court. The younger generation — Democrat, Republican and those disgusted with both parties — is almost unanimously in favor of social change that affects women (“no means no”), gays (“marriage equality”) and the environment (climate change is real, not a Chinese-inspired hoax). This rapid shift has proven to be disconcerting to many older people, particularly men, who cling to (no, not their guns and bibles) their now-unpopular views. They want to say no to social change. Trump says they’re right. And he says that he’s their voice. 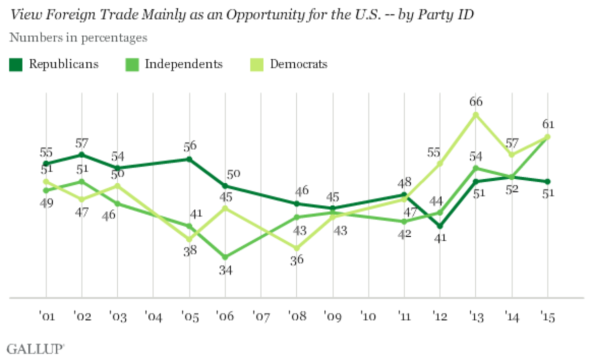 For decades, Democrats were the protectionists and Republicans were the free-traders. Democrats, influenced by labor unions and environmentalists, resisted trade liberalization as bad for workers and the environment. Republicans embraced globalism and immigration as good for business, good for America, and, ultimately, a net plus for American workers.

Not any more. The Republican Party, radically altered by a massive influx of middle-aged white men displaced by a global economy for which they no longer have the requisite skill set, has become the party of protectionism and economic nationalism. They see immigrants as a threat to American jobs and American values.

Democrats and independents are now more open to international economic liberalization than the Republican Party, the traditional home of the U.S. business community. Trump is the big winner in this new reality. His “America First” backers crushed the internationalist Republicans like Jeb Bush in the Republican primaries and are challenging Democratic dominance in the nation’s economically distressed industrial heartland.

We live in parallel information universes. Left-of-center Americans rely on a mix of CNN, NPR, MSNBC and the New York Times for their political and government news. Most of those news outlets present news from a predictably liberal mindset. Right-of-center Americans overwhelming rely on Fox News and local radio for their information. Fox and the Rush/Hannity/Coulter axis is not just conservative, it is almost anarchic in its desire to tear down institutions of the “elites” and the “establishment” while advocating for the grievances of whites who feel they are innocent victims of racial minorities, immigrants, non-Christian religions, China, Japan, Korea, Iran, Israel, Mexico, NATO … you name it.

The result of this Great Information Divide is that facts have become obsolete. The news of the left may be biased, but it is rooted in objective fact. Nonpartisan fact-checking websites can tell you how often politicians tell you the truth or lie to you. The news of the right has increasingly become resistant to globally accepted facts (evolution, climate change) and has allowed the virus of “fake news,” often generated in countries like Russia and Macedonia, to infiltrate the political mainstream. As Trump campaign manager Kellyanne Conway said after Fox News retracted a false story that Hillary Clinton would soon be indicted, “The damage was done.”

Social media has exacerbated the divide. Citizens follow information sources on Twitter and Facebook that confirm their preconceptions of reality. This has become the first post-fact-check presidential election. Trump, with his finger on the “tweet” button of his smartphone and a knack for creating viral content, is the perfect politician for this moment in history.