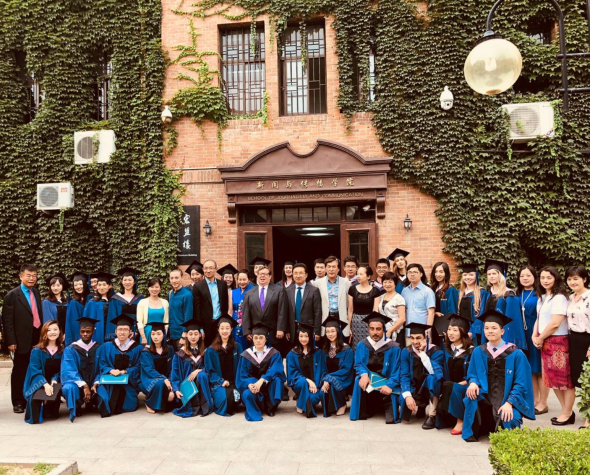 GBJ graduates pose outside of the School of Journalism and Communication

Rapid advances in Artificial Intelligence technology give journalists “great reason to be optimistic about the future” of an industry that has struggled with declining audiences and revenues for the past decade, John Liu, Bloomberg News Executive Editor for Greater China, told 2018 Global Business Journalism Program graduates at the annual commencement ceremony on June 5.

Innovative media outlets such as Bloomberg News and The New York Times have harnessed the power of AI to improve the quality of their data analysis and to increase audience engagement by offering digital news stories of particular interest to each news consumer.

“Things are starting to get better know, because people are discovering that consumers are willing to pay for good content,” Liu said in an address at the Tsinghua School of Journalism and Communication. “The next big step, we believe, is AI telling you what you want to read, what you want to watch, before you know it’s there, even translating it into the language you want to read,” he said.

Students from 65 nations and regions have participated in the Global Business Journalism Program since its creation in 2007. This year, Icigumije Brice became the first GBJ graduate from the African nation of Burundi.

Dr. Hang Min, GBJ Co-Director and TSJC Associate Dean for International Affairs, said that at a time of “dramatic change in China and beyond” that it is important for young journalists to have “multiple perspectives” and to offer “constructive solutions and not just destructive criticisms.”

“Stay open,” she urged the graduates. “Never close any window of opportunity and never say no to something because it’s not your planned path.”

GBJ Co-Director Rick Dunham told the students and their families that the media industry needs to do more to boost the careers of women.

“In the GBJ program, about three-fourths of our students are women, and with rare exceptions, women are the top performers in our program. Yet many of these high achievers may face obstacles in the job market. Women suffer discrimination, overt and hidden, in hiring, promotion and pay,” he said. “We must overcome these insidious forms of male discrimination. In the words of the American civil rights anthem of the 1960s, ‘we shall overcome, some day.’”

Professor Dunham noted that TSJC “is leading the way in empowering women,” and Liu noted that five of the six GBJ grads hired by Bloomberg have been women.

“Not only is advancing women in the workplace the right thing to do, it is also good business,” he said.

Top GBJ students also offered their perspectives on the program. Speaking for the Chinese graduates, Zhu Yuxuan, hailed GBJ as “a great program for us to develop a global vision … while we are gaining professional knowledge.” International student Zhu Yuxuan, of Japan said GBJ “has allowed me to broaden my horizons and meet friends from all over the world.”

“Every day, we met talented and outstanding students from all over the world, and had the chance to interact with local Chinese students,” she said. “All of us played together, learned together, and progressed together over these two years, and I’m sure every one of us emerged as a better person than we were two years ago.”

Sarah Talaat of the United States, chosen as the GBJ speaker at the TSJC ceremony later in the day, said GBJ students were not only taught practical journalism skills, but also “how to pursue a career grounded in truth and patience, brought about by hard work and dedication, and held to the highest standards of our chosen fields.” She predicted that the program’s sponsors “will see a return on your investments in the shape of better journalism and communication for the benefit of the world.”

Speaking for GBJ graduates was Grace Shao of Canada from the Class of 2015, who worked at CGTN for two years and is returning to academia this fall to study data journalism at Columbia University in New York. Shao, who covered top global economic issues and developments in Korea during her time at CGTN, urged graduates to “undersell yourself” and take care of their health.

“This industry isn’t for the meek,” she said. We have to be on our toes at all times; you have to have writing skills, multimedia skills, analytical skills, people skills, presentation skills, and so on, I can’t think of a job that demands a more well-rounded candidate. Believe in your talents and all that you’ve learned here from your Tsinghua professors!”