The big announcement: How the Twittersphere reacted to my new job in China

People who know me well know that I don’t possess one of the larger egos in American journalism. So I’m a tad apologetic for the blatant boosterism that follows. But I wanted to do it to thank all of my friends and the public officials who took to social media to respond to this announcement.

My co-director job at Tsinghua’s Graduate Business Journalism program will allow me to pursue my love of multimedia journalism and training.

I am thrilled to be reunited with friends from @BW days: Joyce Barnathan, president of @ICFJ, and @janesasseen, who is joining me on faculty

The overwhelming — and rapid — response reminded me of the power of social media. Twitter and Facebook have transformed our means of communication in just a few years. (Six years ago, when I left Business Week for the Houston Chronicle, I had to send emails to all of my friends just to let them know what had happened.)

Just like we do on Texas on the Potomac, I’ll start with Capitol Hill reaction:

Congratulations to @rickdunham and thanks for your years of service! Wishing you all the best in your next endeavor.

Even former Sen. Kay Bailey Hutchison, who’s had to deal with my questions since my days as a young pup at the Dallas Times Herald, weighed in:

@rickdunham – you did a great job reporting for the @houstonchron! Tsinghua is one of the top univ. in china; an exciting challenge for you.

In the polarized American political world, there was bipartisan agreement — for once.

.@RickDunham, TX & DC are losing a great reporter and a true pro with your departure. You’ll be missed. All the best in your new adventure.

.@rickdunham @HoustonChron Whaaattt?!? I want to say congratulations but you will be so missed!!! Ok…congrats!

@rickdunham @MattMackowiak @HoustonChron Wow! Great news for you and your soon-to-be students! Best of luck, Rick.

.@rickdunham Best of luck on your new journey. Thanks for your service to our community. Keep us informed.

@rickdunham Rick, going to miss your coverage & insight! But, can you do all of us a favor and take Steve Stockman, among others, with you?

Reaction poured in from around the world, Helsinki to Beirut to Shanghai:

@rickdunham @HoustonChron Congrats. Thanks for great reporting. In the age of social media – and easy air travel – I’ll keep following you.

It was nice to hear from my colleagues:

@rickdunham Bummer for us, good for you! Congratulations!

@rickdunham @houstonchron A grumpy goodbye to the least curmudgeon political reporter I know. I’ll miss ur wit, ur energy and ur Rolodex.

@rickdunham Congrats to a true pro & great @Hearst colleague who will be so missed!! Onto great adventure at Tsinghua University in Beijing!

@rickdunham @HoustonChron You will be sorely missed! Can we visit you in Beijing?

I’m especially grateful for the kind words from my former interns who have made me proud over the past six years.

Congrats to @rickdunham on his move to Beijing’s Tsinghua U. Those journalism grad students are lucky they’ll get to learn from him. I was.

One of my greatest mentors. Congratulations. MT @RickDunham I’m leaving the @HoustonChron to run a graduate journalism program in Beijing.

@rickdunham Congrats!!! What an adventure. You will be missed.

Congratulations to @rickdunham, who I met as a rising college senior covering the DNC and RNC in 2008, and let me work at @txpotomac in 09

All the best to @rickdunham and his move to China. Mentored me at my first real world gig at the @HoustonChron. Enjoy it, I know you will

@rickdunham Thank you. And — OK! Sounds fun. Don’t ever forget our inaugural use of video (with giant flashcards) at @TxPotomac!

And I’ll leave you with the words of that ancient Chinese philosopher Wayne Slater:

@rickdunham Wow, sorry to see u leave but what a great opportunity. A great reporter. Like the proverb: May you live in interesting times.

Top Ten: My proudest accomplishments at the Houston Chronicle

I have been fortunate to be able to experiment and innovate over the past six years at the Houston Chronicle. As I look back on my tenure at Texas’ largest newspaper, I am particularly proud of these accomplishments:

1. Creating Texas on the Potomac

Launched in December 2007, Texas on the Potomac developed into a valued “brand” in Texas journalism — THE place to go for news about Texans in Washington or national news of interest to a Texas audience. We proved that high quality journalism and “clicks” are not mutually exclusive. We built a large and loyal audience not only in our home base of Houston, but in Austin, Washington, Dallas-Fort Worth and in more than 20 countries around the world including Finland, Norway and Korea.

Chronicle editor-in-chief Jeff Cohen hired me to reinvent the Chron Washington bureau, and I took the challenge to the next level. I reimagined how a regional newspaper should cover the nation’s capital. Rather than duplicate the wires or the national newspapers, we tailored our national stories to our local audience. We offered analytical coverage explaining the importance of the events that were unfolding in Washington. And we covered the Texas delegation and Texans on the Potomac like they had never been covered before. We broke news story after news story on the web and then offered value-added coverage for print. We had a robust social media presence, too, offering comprehensive coverage to readers interested in Houston and Texas politics on whatever platform they preferred. All while seeing our staff shrink. And shrink.

With MacKenzie Warren before she became a famous TV anchor. (Photo by Marco Van Stralen)

3. Helping to launch the careers of so many talented young journalists

It’s been a pleasure and an honor to work with so many talented interns from across the globe. Our former interns have gone on to journalism greatness (already) at the Los Angeles Times, New York Times, Politico, The Hill, Roll Call and many other news outlets, large and small, print and broadcast … and digital. I hope my interns learned as much from me as I learned from them. The interns’ talents and enthusiasm prove to me that there is a future in journalism. To all my interns: You have inspired me.

Through my role as president of the National Press Club Journalism Institute — the educational and charitable arm of the National Press Club — I was able to teach thousands of aspiring journalists, midcareer journalists, journalism educators and professional communicators the skills they needed to survive and thrive in today’s rapidly changing multimedia world. Whether the subject was writing for the web or building a community and brand via Twitter, I embraced the turbulent times and tried to help others navigate through rocky seas. That training has trained me for the next chapter in my life. 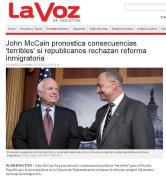 5. Offering robust coverage of issues of importance to our Latino audience

Before Texas on the Potomac came along, there was a void in “mainstream media” coverage of Latino politics and national policy issues of interest to Texas Latinos. With the help of my TxPotomac compatriots and superb La Voz de Houston editors Aurora Losada and Silvia Struthers, we provided comprehensive coverage of important issues such as immigration, health care, border policy, U.S.-Mexico issues, Voter ID, voting rights, redistricting, education and other matters of particular interest to our Latino audience. We gave special attention to Latino elected officials and representatives of heavily Latino districts across Texas. I often wrote stories that appeared in print only in Spanish in La Voz. 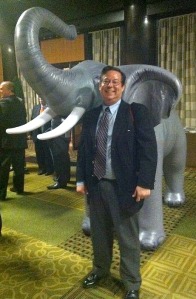 Texas Associated Press Managing Editors gave only one journalism award for coverage of the 2012 elections. It was to our Houston Chronicle team for coverage of Rick Perry’s disastrous White House run. I was proud to have created “Rick Perry Watch” on Texas on the Potomac, the forerunner of our robust “Perry Presidential” web site. Our coverage combined breaking news, ahead-of-the-curve analysis, multimedia storytelling and interesting items culled from other outlets. The result was the most comprehensive daily report on an ill-fated campaign, one that became a must-read for political reporters covering the 2012 campaign.

“First, readers were lucky to have a newspaper willing to dedicate the staff to cover Perry’s bid as an intensely local story,” the Texas Associated Press Managing Editors wrote in their citation. “Just as important, the overall level of work was superb.”

7. Starting a monthly lunch with the Texas delegation

When I arrived as Chronicle Washington bureau chief, there was widespread grumbling in the Houston-area congressional delegation about the Chronicle. To improve lines of communication, I created a monthly, bipartisan lunch with our local lawmakers and the Chronicle reporters and editors. It gave Houston-area House members a chance to tell us what they were working on and what their constituents were talking about, and gave us a chance to ask questions and develop in-depth stories. It also provided opportunities for some bipartisan legislative efforts on issues such as energy, transportation . All in all, it allowed all of us to better serve our joint constituency — the news consumers of Texas and the voters of the Houston area.

I owe bipartisan thanks to Rep. Kevin Brady of The Woodlands and Gene Green of Houston for rounding up lawmakers from Houston — and more recently South Texas — each month.

8. Reaching one million monthly page views on Texas on the Potomac

When I created Texas on the Potomac, I asked how we would judge success. I was told 100,000 page views per month.

Well, we twice hit one million page views — once during the Republican National Convention in August 2012 and again in November, the month of the election. The doubters have been vanquished. Even with very little publicity, we built a franchise. It also helped that I taught our tremendous team of interns the science of search engine optimization. 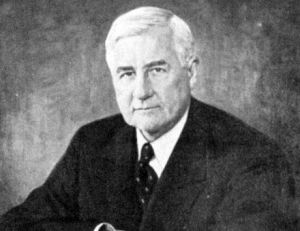 9. Winning all those “Jesse” Award nominations — if not the award itself

I’ve been the Susan Lucci of the Houston Chronicle. Year after year, I’ve been nominated for the “Jesse” Award for outstanding Houston journalism but I never took home the statuette. Reporter of the Year. Editor of the Year. Innovation of the Year. Blog of the Year. Multimedia Journalist of the Year. And some more that I can’t remember right now. Congrats to all the winners! As they say, it’s an honor just to be nominated.

10. An emphasis on teamwork

The Chronicle is one of the ten largest newspapers in America and has drawn, over the years, some of the most talented journalists in America. I hope I contributed to that sense of teamwork — the “we” rather than the “me” — that leads to great journalism. My DC colleague Stewart Powell has been the consummate professional and a willing teammate on Houston stories. Energy expert Jennifer Dlouhy has “taken one for the team” numerous times — I’ll remember those emails at 10:30 on Sunday night as she gets a head start on the week ahead.

Special kudos to super-editor George Haj, who has the best news judgment of any editor I’ve ever worked with, Jacquee Petchel, the best investigative and projects editor in the USA, now teaching the next generation at Arizona State, Ernie Williamson, the best election night editor there ever was, Alan Bernstein, who has a deeper knowledge of Houston politics (and Chron politics) than anybody else in town, Peggy Fikac, the hardest working reporter in Texas, Dwight Silverman, the tech wizard and my favorite web consultant, and Patti Kilday Hart, my partner in journalistic crime in Dallas, Austin and Houston.